Short History of the Desert Eagle 50

Rarely is a firearm so unusual and powerful that it manages to transcend the firearms industry to become recognized worldwide by shooters and non-shooters alike. Thanks to shows like Miami Vice and movies like The Punisher, the Desert Eagle 50 semi-automatic handgun has become a star.

Developed by Magnum Research starting in 1979 and finally put into production in 1985 by Israel Military Industrial Ltd (now IMI), the Desert Eagle is a unique semi-automatic gas pistol.

Specificities of the Desert Eagle 50 Airsoft

The Desert Eagle airsoft is one of those replicas that give a strong impression of metal. The only plastic present on the weapon is the clip, but it is also a solid ABS plastic part. Generally, Desert Eagle airsoft replicas are quite heavy, as they are almost entirely made of metal. But that doesn't stop them from being easy to hold and incredibly accurate. In addition, they are known to be relatively quiet.

While the rear sight is fixed, the front sight has an adjustment to give you the most accurate view of your target. The barrel has a powerful recoil and blowback system. To optimize the performance and durability of the gun and magazines, it is recommended that the magazines be allowed to return to normal temperature before being reused.

Cyma offers two variants of the Desert Eagle 50 with the same technical characteristics, namely a 6 mm caliber, a weight of 900 g, a metal/ABS finish, a magazine with a capacity of 30 balls, a fixed breech, but with an adjustable Hop up, a power of 0.4 joule for a velocity of 220 FPS. Thus, the only difference between the model CM121 and the model CM121T is the color. Indeed, the first one is in black and the second one in desert color.

Like the Cyma variants, the two replicas manufactured by KWC are almost the same. The only visible difference is the color. Thus, we have a Full Metal Black replica and a Full Metal Chrome replica. As for the technical characteristics, we find the same length of 270 mm, a weight of 1100 g, a power of 1.6 joule and a velocity of 410 FPS. Then, although the breech is mobile, the Hop Up remains fixed. Finally, the KWC replicas of the Desert Eagle 50 are equipped with a 22-round magazine.

On Phenixairsoft, there are three Cybergun/Swiss Arms replicas of the Desert Eagle 50. Two of them are Desert Eagle 50.AE Blowback, one with a metallic tint and the other black. Apart from the color, they have the same characteristics, namely a length of 270 mm, a weight of 1100 g approximately, a mobile breech, an adjustable Hop Up, a magazine with 20 balls, but also a power of 1.2 joule for a velocity of about 360 FPS. The third Cybergun/Swiss Arms variant, the Baby Desert Eagle 50, is a shorter (204 mm), lighter (755 g) and slightly less powerful (1.1 joule) replica. And even its breech is fixed, the Hop Up remains adjustable.

Two mechanisms are proposed for replicas of the Desert Eagle 50 available on Phenix airsoft. The two models from the manufacturer Cyma are electric airsoft replicas and all the others run on CO2. 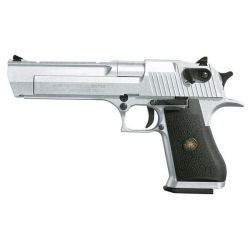 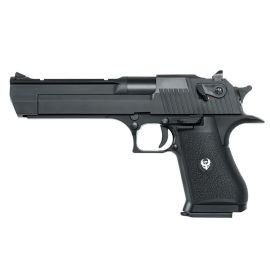