Historical presentation of the Spectre M4

The Spectre M4 is an Italian submachine gun produced by the SITES factory in Turin. Roberto Teppa and Claudio Gritti designed this weapon in the mid 1980s. Production in Italy ceased in 1997 with the closure of SITES, but continued in very small numbers in Switzerland through Greco Sport SA, a company founded by Gritti, until 2001. The models produced until 2001 are mainly civilian "sport" models. The Spectre M4 is used by the Swiss Armed Forces and by Italian special forces and has been exported elsewhere in the world.

It is a compact and light weapon, designed to deliver instant firepower and is very well suited for close combat requiring a short range. The specificity of this machine gun is that it uses a double action/single action trigger group. It features a folding frame and an ambidextrous grip. In addition, the locking latch and the selector lever can be engaged on either side of the weapon.

The Spectre M4 Airsoft, while bearing the "M4", has nothing to do with the M4 platform. The first thing you'll notice when you pick up the Spectre M4 Airsoft is that it's heavy, and heavier than you'd typically expect for this kind of Airsoft replica. The high weight of the Spectre M4 is a testament to the excellent quality of materials used in the construction of this replica. Indeed, the Spectre M4 Airsoft is made of a very high quality polymer. The quality of this plastic can also be felt upon close inspection of the gun. When touching and tapping the plastic, it feels like a very sturdy and solid return. There are a few small pieces here and there that are metal, such as the firing selector, charging handle and sight.

The Spectre M4 Airsoft has optimal ergonomics. It is easy to hold, never slips and has perfect balance. The position of the firing selector also contributes to the ease of use of this Airsoft replica. Indeed, it is arranged in a clever way, the same way as on an M4 Airsoft.

What are the different Spectre M4 Airsoft replicas available on Phenix Airsoft?

The Spectre M4 Airsoft replica that is available on Phénix Airsoft works thanks to an electric mechanism. For optimal performance, it is recommended to use a LiFe 9.9v 750 mAh battery. 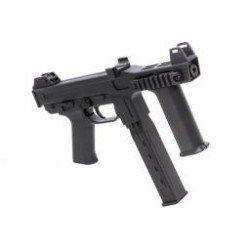