Short history of the Barrett M82

The Barrett M82, standardized by the U.S. Army as the M107, is a semi-automatic, recoil-operated sniper rifle developed by the U.S. company Barrett Firearms Manufacturing. Despite its designation as an anti-materiel rifle, it is used by some armed forces as an anti-personnel system. The M107 variant is also called Light Fifty for its .50 chambering and considerably lighter weight compared to previous applications.

It should be remembered that the Barrett M82 sniper rifle is legendary and a true benchmark in military and law enforcement circles as one of the most accurate and effective sniper rifles on the market.

Finally, it should be noted that the Barrett M82 airsoft is an easy to maintain weapon. Regular cleaning and re-lubrication of the compression parts will keep it perfectly sealed, like any self-respecting airsoft sniper rifle.

The Snow Wolf Barrett M82A1 AEG is a 6mm caliber variant that is 1440mm long and weighs 5.8kg. It should be noted that the barrel measures 670 mm. This airsoft sniper rifle comes with a magazine with a capacity of 150 balls and an adjustable hop up. The firing system is composed of a safety catch, and an automatic/semi-automatic selector. In terms of performance, the Snow Wolf Barrett M82A1 AEG deploys 1.5 joules with a velocity that ranges from 390 FPS and 400 FPS.

The Barrett M82 Galaxy G31C is a full metal variant. It has a length of 1390 mm and weighs approximately 4 kg. We appreciate in particular the presence of a 50 cm Picatinny top rail. In terms of performance, the Galaxy G31C Barrett M82 has a power of 1.7 joules for a velocity of up to 430 FPS. One of the advantages of this replica is that it comes with a 3-9X40 scope, a bipod, a barrel cleaning rod and a speedloader.

The Barrett M82 airsoft replicas are equipped with a gas powered mechanism. It is recommended to use 0.20g pellets for maximum range. 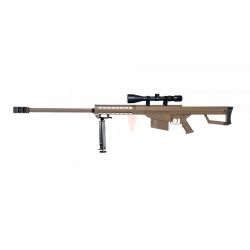 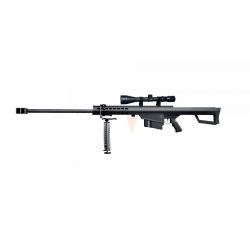 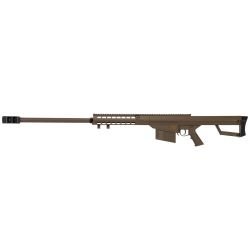 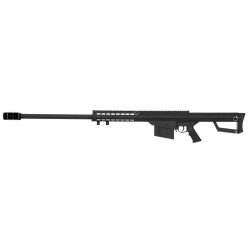 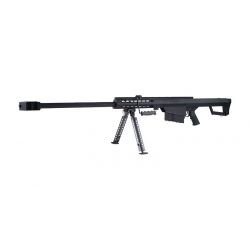