Historical presentation of the RPK

The RPK-74 is a light machine gun and automatic weapon for special forces. It was designed in 1974 by the famous Russian designer Mikhail Kalashnikov as a modern version of the AK-47. Indeed, the RPK-47 is literally the modified LMG variant of the AK-47. In fact, the RPK was created as part of a program to standardize the Red Army's small arms inventory. The RPK-47 was used by many countries from Eastern Europe to Asia due to the affiliation of some countries to the Soviet Union. The RPK-47 was replaced in 1991 by a much more modern variant, the RPK-74M.

The RPK Airsoft replica is impressive. Indeed, this replica is imposing by its dimensions and resembles much the dimensions displayed by its real version. All the stylistic features of the original weapon are recognizable here, including the two-tone metal and wood finish. Among the metal parts of the replica are the receiver, the false breech, the fire mode selector, the bipod, the side rail, the sights, the front and rear strap attachments and the barrel. The wooden parts are the stock and the handle.

The RPK Airsoft replica allows you to choose between three firing modes, namely "safety", "full-auto" and "semi-auto". In terms of performance, this replica does well, both in terms of rate of fire and accuracy. Finally, it should be noted that this replica is positioned in entry/middle range. It remains very accessible in terms of price.

What are the different RPK replicas available on Phenix Airsoft?

Phenix Airsoft offers only one airsoft replica of the RPK-47. It is the RPK47 Metal & Wood by Jing Gong. This replica is based on a 6 mm caliber. It is 1050 mm long and weighs 4.2 kg. The breech is fixed, while the hop up is adjustable. It can receive a magazine with a capacity of 600 balls. In terms of performance, this replica has a short shaft motor with a 14 mm counterclockwise thread that delivers a power of 1.4 joules. If you shoot in good conditions.

Thanks to the presence of a selector, you can choose between three firing modes ("safety", "full-auto" and "semi-auto"). The other advantage of this replica is that it is customizable and adaptable. Indeed, it will be possible to change the capacity of the magazine and other internal parts.

The RPK-47 replica available on Phenix airsoft works thanks to an electric mechanism. 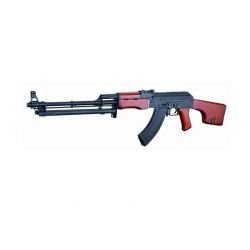 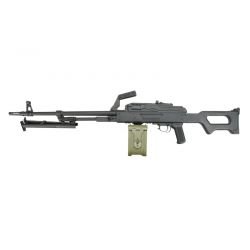