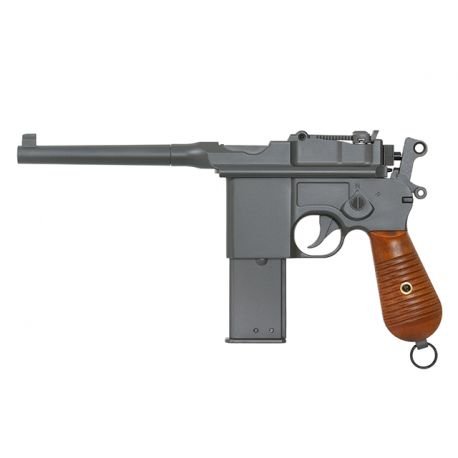 The C96 from Mauser was developed at the end of the 19th century in Germany. After difficult beginnings, it becomes a handgun much appreciated by the Russian revolutionaries then the soldiers of the Prussian army. Chance of the story, one of the most famous users of the C96 was known under the nickname "Koba". He made several robberies with this pistol. A few years of revolution later, "Koba" left his pseudonym for a better known name: Joseph Stalin. Very popular throughout the twentieth century, it will influence the design of Soviet weapons (the target organs of the AK series for example). Widely copied around the world, this gun will experience a new era of glory with the cinema. Transtrained in blaster, he will save the galaxy and the rebels in the work of Georges Lucas.

Made entirely of metal (except for the handle which is in ABS imitation Wood) this replica is endowed with magnificent finishes. Its ball magazine has 28 shots and can be used as a "tactical grip". Its fixed yoke makes it low on gas and its long barrel offers surprising accuracy. A beautiful replica that suits both collectors and players.