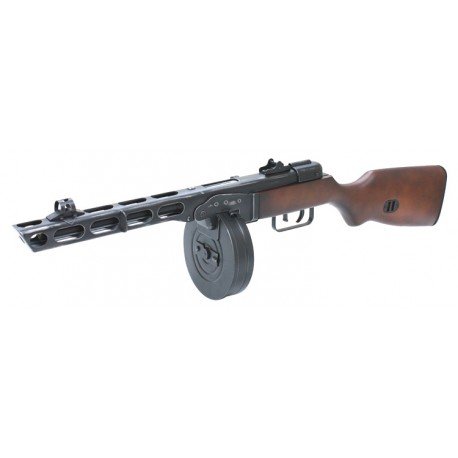 Supplied without charger or battery charger

The latter comes with its Camember 2000 manual ball magazine. Made of metal and wood, the battery is placed in the stick and the cylinder head is mobile.

Ultra realistic, we are facing a very beautiful replica of the real PPSH 41 used by the Russian army during the second war.

Internally, we are dealing with a metal gearbox running on an High Torque motor. New design for the gearbox with its quick change system for the spring guide.

The PPSh-41 is a Soviet submachine gun used during the Second World War. It is a simple and inexpensive weapon to produce, which meets the imperatives of production of the time. Capable of a semi-automatic and automatic firing, its mechanism is operated by the recoil and pulls breech open. The security of the weapon is integrated in the cocking lever and makes it possible to lock the breech in the closed or open position. All PPSh-41 are equipped with a wooden shoulder stick.
Designed by Gueorgui Chpaguine, the PPSh-41 (Shpagina Pistol-Pulse nicknamed Peh-peh-shah, Shpagin rowas one of the weapons produced in greater numbers during the Second World War. It was intended to become a cheaper alternative to the PPD-40 which was long and expensive to produce. One of the reasons for its low cost is the total absence of screws and bolts, all parts being machined.
iniIn addition, the PPSh-41 received the 71 pound camembert loader from the PPD-40, itself a copy of the Finnish Suomi KP31 loader. But its size, the difficulty of reloading it and its relative reliability meant that 35-stroke curved magazines were used in 1942. When the 35-ammunition curved magazine was available, it was customary for the soldiers to keep an assault, a camembert charger as the first charger. Each soldier's supply was probably a pie chart for 5 to 6 curved magazines, 3 pie charts before. Its barrel is protected by a fairing of metal which envelops the muzzle of the barrel and which acts as flamethrower.
The developmentThe PPSh was initiated in part by the winter war against Finland, during which the effectiveness of machine guns was proven in close combat in the forest or urban area. The weapon was developed in mid-1941, and was produced by a whole network of factories in Moscow, where senior members of the local Party were themselves responsible for achieving the production targets. Hundreds of weapons were built in Novemberin 1941, then another 155,000 left the factories within five months. In the spring of 1942, the factories, one of the largest of which was Kovrov's machine gun factory, were about 3,000 units a day.