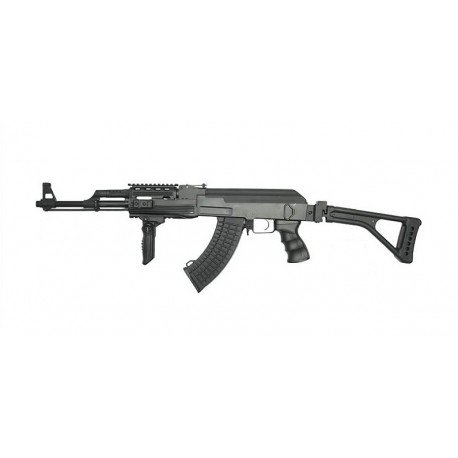 Be careful not to let the battery charge for more than 5 hours.

Cyma attacks here an unknown version of this Russian rifle: developed for the Spetznaz at the beginning, it is more and more regularly within the regular troops of the Russian army.

Made of metal and ABS, this AEG comes with an ergonomic handle and a RIS handguard. The replica comes with a charger of 600 metal balls (Hi Cap). Internal side, metal gearbox of the famous manufacturer recognized as the best in its category for replicas type AK.

The AK-74 is an assault rifle commissioned by the Soviet Union in 1974 to replace the AKM with a smaller 5.45 caliber weapon. M74 that can offer the same advantages as the American M16. But the new Red Army weapon was distinguished by a muzzle brake, and fittings and a charger almost entirely plastic, instead of the traditional metal. It was designed as a temporary weapon to quickly use the new 5.44 × 39 mm M74 ammunition, as a transition before adopting a more modern rifle. The first prototype was born in 1970 under the designation AK-70, it is exactly like the AKM-59 in sheet metal and wood but has a metal charger of a prototype of ammunition 5.45, it is later that we decided on the real model in plastic and metal.