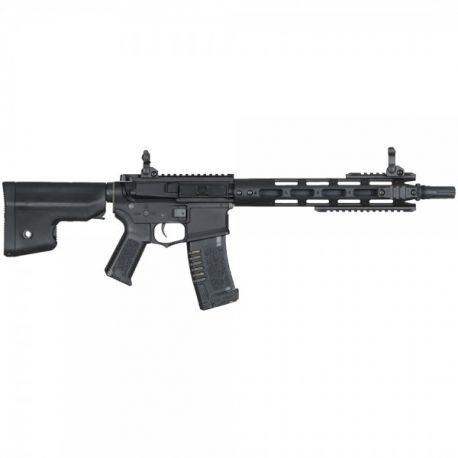 The Amoeba CG-003 is one of the most practical replicas!

Design is still very classic, but for those who like this aspect, the replica has all the advantages of an Amoeba, such as Honey Badger for example, with a more classic crane lacrosse letting the use of more swift batteries more easily, let's see this replica more closely.

The body of the replica is made of reinforced Polymer equipped with a picatinny tactical rail, also called weaver, in 22mm. The handguard is aluminum, the base is cylindrical but past the base of the body, the handguard is 8 sides pre-equipped with 4 rails, 2 times 65mm, 115mm and 170mm.

The outer barrel measures 300mm and is metal, ending with a flame cover is very close to the models on the Scar, it is also possible to mount a SCAR silencer, available here , on the replica.

The metal sights are both collapsible and removable.

Finally is the crosse type crane, a little wider, but it can get larger batteries than the Honey Badger version.

Also equipped with the Amoeba EFCS gearbox, compatible with the M4 parts in V2 gearbox, it is possible to quickly change the spring once the stock is removed and the guide spring (quarter turn).

The EFCS system not only protects the electric surge but also sets the shooting mode according to 4 mode, hence the name "Electronic Firing Control System":

LiFe batteries can not be used because it irreparably and irreversibly damages the EFCS !!!

The EFCS programmer is not included with the replica, it is available here => Ares EFCS Case for Amoeba