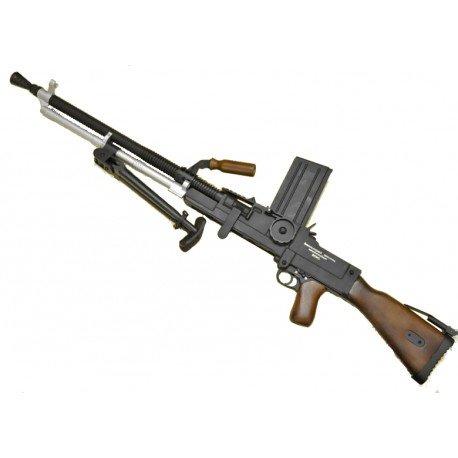 In 1924, the engineer Vaclav Holek creates the LK 24. Modernized, this FM becomes the Lehký kulomet ZB vz. 26 (for submachine gun ZB model 1926) regulated in the Czechoslovak army until the invasion of the country by the Third Reich in 1938. The weapon was perfected in 1930 to become the ZB-30. The robust and efficient weapon sells well. Despite the appearance of this improved version, the FM Mle 26 did not disappear from the production lines of the Zbrojovka Brno in Brno. During the Second World War, it was built ZB26 on behalf of the Wehrmacht. These weapons are referenced as MG 26 (t) or "machine-gun" (MG = MaschinenGewehr = "machine-gun": exactly the MG 26 = Maschinengeweh leichtes = "light machine-gun" model 1926) of Czechoslovak nationality. Similarly, the ZB-30 is renamed MG 30 (t) or MG 30 (j) if it is a Yugoslav model taken from the enemy. In addition to Czechoslovakia, the ZB-26 and / or ZB-30 has been widely used in Europe the following nations: Albania, Germany, Spain, France, Lithuania, Sweden,USSR and Yugoslavia. In Asia, the FM armed Saudi Arabia with Turkey, Iran, Japan, China (KMT) and Viet Cong. In Africa, they experienced fire at the hands of Algerian fighters (ALN) and Ethiopians. They were even exported to Peru. In Turkish, Lithuanian and Swedish cases, these are direct sales approved by the Prague Government. In the Chinese case, Romanian and Yugoslav, it is a licensed production. Germany has used weapons of Czechoslovak and Yugoslav origin. In the German, Russian, Japanese and French cases, these are weapons captured on the enemy during WW2 and Indochina.

* Non-contractual photo, the markings are not present./ P>