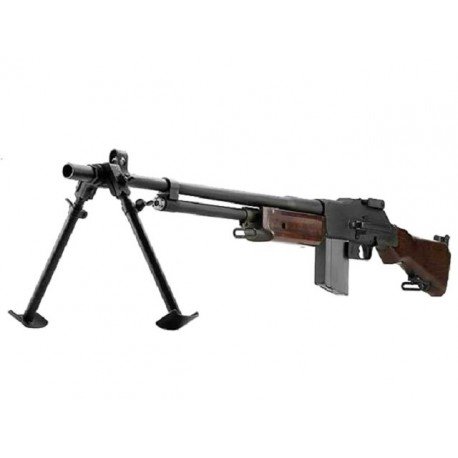 the replica fires only in full automatic

The 1918A2 BAR is probably the most produced BAR.
It is produced from 1940 to 1945 by IBM and New England Small Arms Corporationblending six firms to provide military demand).
It differs from previous by the addition of a tubular support mounted on the butt (behind the grenadiere).
The bipod, fixed in front of the handlebar on the flame shield, has pads.
The front, even smaller, incorporates a metal plate heat dissipation.
The rise is now borrowed from the Browning machine gun.
The selector of the M1918 and M1918A1 gives way to a regulator of rate of fire.
During the Second World War, the weapon is further modified by a final shortening of the front with new gripping grooves, a synthetic stock, a governor of borrowing gases. At the end of 1944, a handful of transport appeared.

This version was used after 1945 during the Korean War (reworked by Royal McBee Typewriter Co). .
The ARVN made him know the fire again between 1964 and 1975.
Taiwan and many South American countries still have BAR in their reserves.