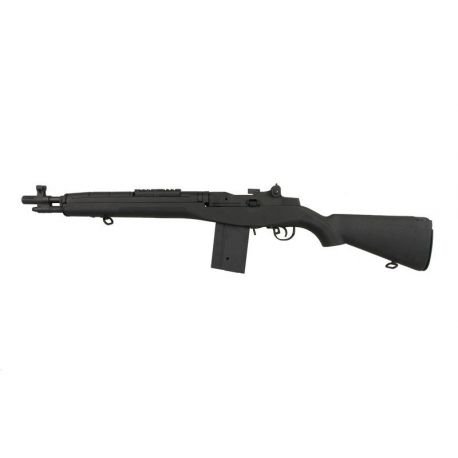 Cyma   M14 model Socom RIS color Black. Classic replica of players wanting to play against snipe . Very good base because compatible with the set of parts for M14   AEG . Power of about 340 fps , the replica is supplied with a 8.4V 1100mAh battery and its battery charger in addition to the charger 450 balls Hicap (wheel).

ce = "Arial"> The Socome version of the M14 is a shorter version, more manageable, allowing players to enjoy the benefits of the M14 in close combat. The body of the replica is nylon, as the real weapon is not metal, however, the upper part is metal like the Gearbox, version 7. Unlike many, see almost all replicas on the market, the barrel is 6.04mm, ie a precision cannon, against guns usually in 6.07, 6.08 even on replicas of major brands. The design of the gun is quite pleasant but does not unscrew, not allowing to mount a silencer.

In summary, the Socom can be seen as the reference anti-snipe taking advantage of the quality of the manufacturer Cyma to make a very good replica entry.

The M14 was developed from a long line of experimental weapons based on the M1 Garand. Although the Garand was among the most advanced rifles of the 1940s, he was not a perfect weapon. Modifications began to design the basic design of the basic M1 rifle at the twilight of the Second World War. The changes included the addition of a fully automatic firing capability and the replacement of the 8-pack bulk cartridge load with a detachable magazine containing 20 rounds. Winchester, Remington, and the Springfield Armory owned by John C. Garand offered different designs. The Garand's design, the T20, was the most popular, and the T20 prototypes served as the basis for a number of Springfield test rifles from 1945 until the early 1950s.