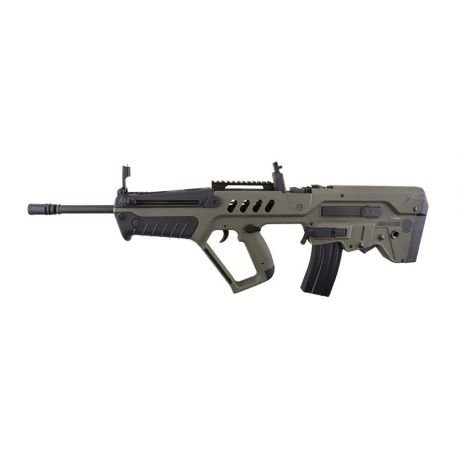 Designed in the 1990s in close collaboration with the Israeli army, the TAVOR is a rifle that is distributed to the IDF security forces in the year 2003. Particularly appreciated by the soldiers because extremely efficient and accurate, it comes in several versions and is intended to replace the GALIL rifle in the Israeli army.

Big bet than adapting the last of the Israeli arsenals to the world of airsoft and it is Ares who has stuck with the talent and brio inherent in the brand.

Entirely designed in polymer of first choice (ABS), the rifle is a Bull pup, that is to say that the gearbox is behind the whole loadr and trigger like on the FAMAS. This system has a very big advantage since it allows to have a very long internal gun and therefore a high accuracy for a replica of the size of an M4.


This rifle is equipped with a hop-up system accessible from the "dust cover" (the latter remains in the open position to facilitate the setting of the Hop Up when pulling on the cocking lever). The replica has a button under the butt that allows to close the "dust cover" and thus avoid small inconvenience related to dust. Weighing more than 3.5 kilos, the AEG is very well balanced and the weight is forgotten as soon as it is supported.

The rifle uses standard M4 / M16 magazines (supplied with 1 x 130 ball magazine) and has 1 side rail at the front and an upper rail to allow the adaptation of a red dot. The original sights are foldable to leave the field clear viewfinders that you fix on it. However players wishing not to Red Dot jerseys will take full advantage of the accuracy of Ares targeting devices.

Internally, Ares serves us a gearbox faithful to his habits: powerful and reasonable power (the rifle displays between 350 and 380 FPS chrony with ball 0.20 grs).

Phenix Airsoft recommends using a 9.6v battery in 2 elements to power the beast (Not Supplied).

The replica is sold without battery or battery charger./ FONT>