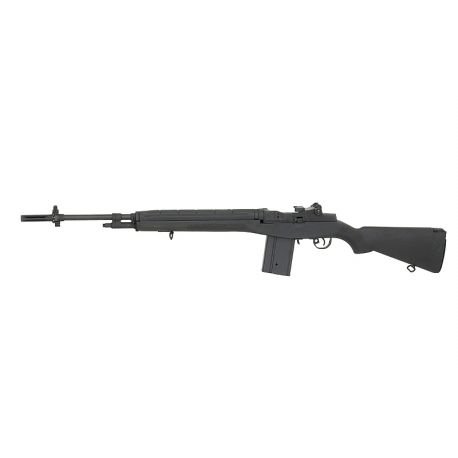 Cyma   M14 Long color Black model. Classic replica of players wanting to play against snipe . Very good base because compatible with the set of parts for M14   AEG . Power of about 340 fps , the replica is supplied with a 8.4V 1100mAh battery and its battery charger in addition to the charger 450 balls Hicap (wheel).

Excellent base for support or anti-snipe, the M14 from Cyma has excellent performancein terms of scope and accuracy. Thanks to its solid stock, it offers excellent stability when shooting and allows a nice shoulder because of a very good balance. The back of the butt allows access to the battery compartment through a valve (very easy to access). This space is large enough to accommodate the largest batteries. The trigger is equipped with a mechanical safety thus reducing the risks of accidental fire. The rifle is equipped with original aiming devices fully adjustable but little without any concern receive a telescope or a red dot / red dot. The version 7 gearbox is entirely made of metal. It is mounted on 7mm bearings. It contains a spring type M 110 which thus allocates good power to the rifle.

The M14 has been devdeveloped from a long line of experimental weapons based on the M1 Garand. Although the Garand was among the most advanced rifles of the 1940s, he was not a perfect weapon. Modifications began to design the basic design of the basic M1 rifle at the twilight of the Second World War. The changes included the addition of a fully automatic firing capability and the replacement of the 8-pack bulk cartridge load with a detachable magazine containing 20 rounds. Winchester, Remington, and the Springfield Armory owned by John C. Garand offered different designs. The Garand's design, the T20, was the most popular, and the T20 prototypes served as the basis for a number of Springfield test rifles from 1945 until the early 1950s.