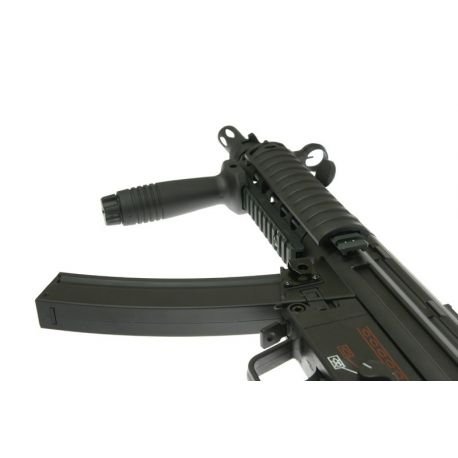 The manufacturer Cyma known for these AK, shows us what he is capable with MP5. Bet successful!

The MP5 A4 RAS comes with a tactical handle that attaches to the RAS handguard for greater stability when firing and better handling, even hand guard is designed to accommodate any type of accessory (lamp, an-peq, grenade launcher etc) to be configured according to your exgences.La full stock premet the use of any type of battery.Il can add a muffler on the flame cover (no screw 14mm negative)

The MP5 (Maschinenpistole 5) is a German submachine gun produced by the firm Heckler & Koch. Developed from 1964 under the designation of HK 54, it was adopted by the police and the German customs in 1966 under the name of MP5. A large number of police departments and special units followed suit later. The MP5 has gone through a lot of releases and is still in production today. Designed as a miniature version of the G3, it works with a mechanism of retardation of action by locking by rollers originally developed during the Second World War for the stg45 assault rifle and found on a large number of weapons produced by Heckler & Koch after the war. The MP5 was originally produced in three versions, the MP5A1 without buttstock, the MP5A2 with a fixed buttstock and the MP5A3 with telescopic buttstock. MP5A1 is particularly rare and MP5A3 is probably the most common.