Historical presentation of the FN P90

The P90 is a defensive weapon designed by the Belgian firearms manufacturer FN Herstal in the late 1980s and early 1990s. The name of the weapon comes from the abbreviation of Project 9.0, which refers to a weapon system of the 1990s. The P90 was originally designed as a compact, yet powerful firearm for vehicle operators, support personnel, special forces and anti-terrorist units.

By 2003, 17,000 P90s were in use by military and police forces in more than 25 countries around the world. In 2009, the P90 and its variants were used by more than 200 law enforcement agencies in the United States. The PS90 sport model is also becoming popular with civilian users.

P90 Airsoft replicas typically consist of a polymer body and a metal upper receiver. Polymer is known to be very strong. This gives the P90 Airsoft replicas a certain durability. In addition, the metal receiver is quite sturdy and has a Picatinny top and an individual side rail on each side of the receiver for lasers and lights.

What are the different replicas of the P90 Airsoft available on Phenix Airsoft?

On Phenixairsoft, there are six replicas of the P90 Airsoft. We will present each of them.

The Cyma P90 RIS Swordfish is a black variant that is 500 mm long and weighs 2.6 kg. This variant carries a 330 ball magazine and has an adjustable hop up. In terms of performance, this variant delivers a power of 1.5 joules for a velocity of 400 FPS.

The Cyma P90 RIS Dominator has the same performance and almost the same features as the P90 RIS Swordsifh. The only notable difference is the length of the weapon (615 mm for the Dominator against 500 mm for the Swordsifh).

The Cyma P90 TR is a mini variant of the P90 Airsoft. Indeed, it only has a 70-round magazine and is much lighter (only 2 kg). In addition, we note that its performance is similar to the P90 RIS Swordsifh and Dominator.

The Cyma P90 with silencer is similar to the P90 TR, both in terms of performance and technical characteristics. The only difference will be the presence of a silencer on this variant which increases the length of the weapon to 660 mm

The WE P90 Open Bolt GBBR is a variant equipped with a 50-round magazine. It benefits from a mobile breech and an adjustable hop up. The length of the weapon is 510 mm for a weight of 2.4 kg. This replica deploys a power of 1 joule for a velocity around 300 FPS.

Finally, the last variant of the P90 available on Phenixairsoft is the APS Custom UAR Gen2 Desert. It has a length of 640 mm and weighs 2.7 kg. With this replica you benefit from a power of 1.1 joule.

The different mechanisms that are offered on the customer site

All the P90 Airsoft replicas found on Phenixairsoft work with an electric mechanism. 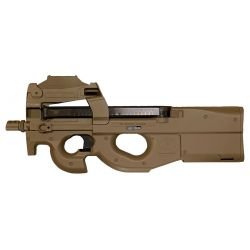 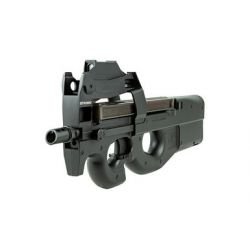 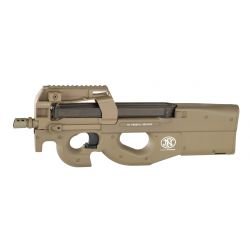 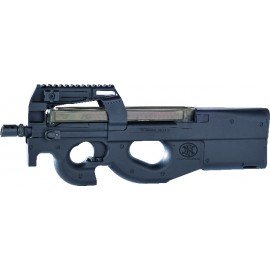