Short history of the CZ-75

The CZ-75 is one of the most successful handguns in modern history, but it wasn't easy for this gun to get to the top. CZ has been one of the leading firearms manufacturers in Europe for nearly 100 years. The Czech gun manufacturer was founded after World War II, but did not achieve international success until the fall of the Soviet Union. In fact, this CZ-75 was not available outside of Europe for several years of production.

Surprisingly, the CZ-75 is one of the most widely used and reliable semi-automatic pistols in the world.

Features of the CZ-75 Airsoft

Virtually all CZ-75 airsoft replicas have impressive build quality. The fit and finish is among the best in the airsoft handgun category. You'll notice, for example, that even after several shots, the painted metal friction areas will show very little wear, which is not always the case with this kind of replica. In fact, the quality of finish and workmanship is guaranteed by the very tight tolerances between the moving parts. Thus, it can be said that at least in terms of design, the CZ-75 replicas are superb and functional copies of the real steel CZ-75. Even all the safety features work in the same way.

When it comes to shooting accuracy, the trigger on CZ-75 replicas is surprisingly light in single action, but incredibly sticky at first in double action. That said, you won't be shooting double action very often. Regardless, it will take a little time for some people to get used to the very light trigger pull.

Phenixairsoft offers eight airsoft variants of the CZ-75. The first seven are manufactured by the ASG brand and the eighth is by KJ Works.

The KJ Works CZ-75 variant, on the other hand, features a 24 round magazine, a movable breech, an adjustable hop up and a finish made of aluminum, metal and polymer. 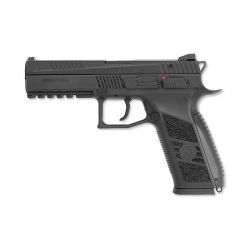