The Sig-Sauer P226 is a pistol designed in Switzerland by Sig and produced in Germany by Sauer.

Developed in response to the U.S. Army's competition to replace the Colt M1911, it is a high-capacity version of the Sig-Sauer P220. Introduced in 1983, and chambered in 9mm Parabellum, it lost by a short head to the Beretta 92. Some U.S. and allied special units have adopted it, however, such as the Navy SEALs and JTF 2, which use a corrosion-resistant version with a SureFire W114D lamp as their standard sidearm. It has also had some success with various military and police organizations around the world, but its compact P228 version is more widely used.

Firing in double/single action or strict double action (DAK system), the P226 has an aluminum alloy or stainless steel frame.) Its stock plates are made of plastic or wood. Its sights are of the metal type (fixed or adjustable).

Sig Sauer P226 Airsoft
The Sig Sauer P226 airsoft is a superb steel replica of the real Sig Sauer P226. You can disassemble this airsoft replica just like the real gun and all the mechanical parts work exactly the same, including the safety catch and the adjustable front sight. As for the design quality, it is generally good. You will be surprised by the finish of this replica which has a paint job that resists wear and tear very well. The Sig Sauer P226 airsoft gun is almost entirely made of metal. Only the handle and some parts are made of plastic.

In terms of use, the trigger of the Sig Sauer P226 replica is quite effective, both in single and double action. Thanks to a good balance of the weapon, your shots will be made with a great accuracy. In single action mode, the grip is quite short and the recoil quite light. In double action mode, although the recoil remains relatively light, the shots are longer. 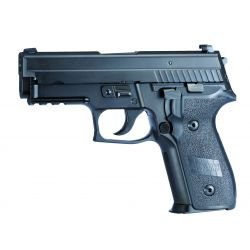 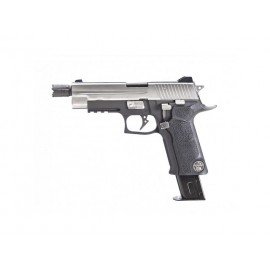