Bersa is an Argentine firearms manufacturer located in the city of Ramos Maijia. The company was founded in the mid-1950s by Italian immigrants Benso Bonadimani, Ercole Montini and Savino Caselli, all mechanical engineers. In 1959, Bersa's first long-range pistol was marketed, the Modelo 60. It was not until 1989 that Bersa marketed its first handgun, the Model 90 chambered for the 9 x 19 mm Parabellum cartridge. In 1994, a new range, called "Thunder" was introduced. The Bersa Thunder are compact handguns and are based on a flashback system.

Today, the manufacturer Bersa is known for its popular handguns, namely the Thunder 380, the Thunder 9 and the ultra compact version of the Thunder chambered in 9 mm, .40 S&W and .45 ACP.

When it comes to the specifics of the ASG Bersa replicas, there is a lot to say; starting with the realism of the replica. Indeed, the ASG Bersa airsoft replicas are very close to the real steel version. The only noticeable difference is the magazine plate which is slightly longer. ASG has also done an excellent job on the quality of manufacturing, both in terms of fit and finish. Everything that is metal on the real gun is metal on the replica. The same goes for everything that is polymer.

It should be noted that the sights, both front and rear, are not adjustable, but that won't be a real problem, as this airsoft gun proves to be amazingly accurate. Finally, the trigger pull on the ASG Bersa airsoft replicas is light thanks to a very realistic blowback system, like most of the best airsoft handgun replicas.

The ASG Bersa BP9CC Blowback variant is a black model that has a magazine with a capacity of 15 rounds. The replica is 168 mm long and weighs approximately 600 g.

Of course, this variant is composed of an assembly of metal and ABS. On the operating side, the Hop Up of the ASG Bersa BP9CC Blowback is adjustable, while the breech is mobile. Finally, for performance, this replica displays a power of 1.6 joule and a velocity of 410 FPS.

On Phenix Airsoft, all the available variants, namely the ASG Bersa BP9CC Blowback and the ASG Bersa Thunder 9 Pro, are offered with a CO2 operating mechanism. 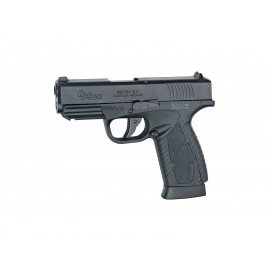 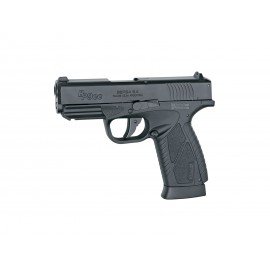