Short history of the Walther P99

The Walther P99 is a semi-automatic handgun developed by the German firearms manufacturer Carl Walther GmbH SportWaffen in Ulm for law enforcement, security forces and the civilian firearms market as a replacement for the Walther P5 and P88.

Work on the design of this new generation handgun began in 1994 and the handgun was introduced in 1997 with serial production beginning the same year.

Features of the Walther P99 Airsoft

The Walther P99 airsoft gun is quite similar to the real steel Walther, except for the disarming device which is not present on the replica. The fairly substantial weight of the replica is nice and helps give this airsoft gun the feel of a real handgun. For a very affordable price, the Walther P99 airsoft replica has an excellent quality finish. Obviously, you find a plastic/polymer frame, but there is a lot of metal inside the airsoft replica, including all the internal parts, in the magazine, the trigger, etc.

This airsoft gun features a blowback action, which means that the slide is raised each time the gun is fired. This adds realism and real recoil when firing. If you're looking for a powerful, realistic airsoft handgun with good value for money, this is a great choice.

The Umarex Walther PPQ is a replica in black that is 180mm long and weighs about 450g. This variant is made entirely of ABS. It is accompanied by a magazine with a capacity of 12 balls. Finally, the Umarex Walther PPQ has a power of 0.5 joule for a velocity of 250 FPS. 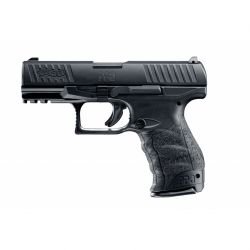 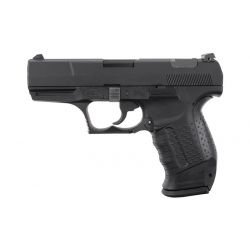