Short historical presentation of the Mossberg 500

Mossberg 500 is a series of shotguns manufactured by O.F. Mossberg & Sons. The 500 series includes a wide variety of models that all share the same basic receiver and action, but differ in bore size, barrel length, magazine capacity and basic materials. The Mossberg 500 series includes the Mossberg 500, 505, 510, 535 and 590, all based on the same basic design by Carl Benson. Originally using a single action bar, it was replaced by a double action bar in 1970.

Introduced in 1960, all 500 models are intended for use in harsh and unsanitary conditions, whether on a battlefield or hunting ground. In addition, they are designed to be easy to clean and maintain. Finally, all 500 models have interchangeable barrels, which can be removed without tools by loosening a screw.

Specificities of the Mossberg 500

Despite a fairly light weight, the Mossberg 500 airsoft replicas impress by their robustness. They are made of a mixture of ABS plastic and metal, and overall, the structural strength is good. On airsoft playgrounds, Mossberg 500 replicas can offer a real tactical advantage when used as a secondary weapon, due to their light weight.

Thanks to the implementation of the BAXS system, Mossberg 500 airsoft replicas are very accurate as airsoft shotguns. They offer a degree of versatility in terms of magazines. Indeed, it is possible to use any Mossberg replica magazine or M47 replica rifle. We also appreciate the fact that the Mossberg 500 replica magazines are not totally opaque. 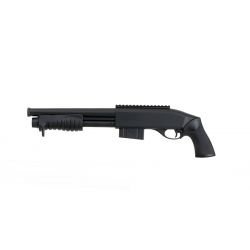 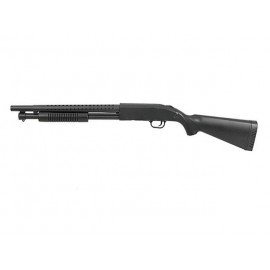