Short history of the Franchi SPAS-12

The Franchi SPAS-12 is a combat rifle designed by the Italian firearms manufacturer Franchi from 1979 to 2000. The SPAS-12 is a dual mode rifle, which can be used for both semi-automatic and pump action operation. The SPAS-12 has been used by many armies and police forces around the world, but the rifle has also been offered to the civilian market. The Franchi SPAS-12 has also made numerous appearances in movies, TV shows and video games.

The SPAS-12 was originally designed as a rugged military rifle and was named a special purpose automatic shotgun. In 1990, Franchi renamed the SPAS-12 to "Sporting Purpose Automatic Shotgun" in order to continue selling the gun in gun stores. Following the U.S. government's ban on the sale of assault weapons to individuals, SPAS-12 imports were halted. The ban expired in September 2004, but Franchi had discontinued production of the SPAS-12 in 2000 to concentrate on manufacturing the SPAS-15 model.

Features of the Franchi SPAS-12 Airsoft

Although the Franchi SPAS-12 are airsoft shotguns, you will enjoy a very high accuracy of shooting. The ammunition distribution is very good, meaning that the pellets do not scatter too much.

The first variant is the ASG 18554 model. It is a model in black and has a magazine of 30 balls. This airsoft replica is 780 mm long and weighs 1.8 kg. This variant has a fixed breech and a Hop Up. In terms of performance, the ASG 18554 deploys a power of 0.6 joules for a velocity of 258 FPS. The second variant is the ASG 16261 which has almost the same characteristics as the ASG 18554, except for a length of 700 mm and a weight of 1.2 kg. Finally, the last variant available on Phenixairsoft is the ASG 15913 called "Tactical". This model is a little lighter than the other two with a weight of about 860 g. What distinguishes this "Tactical" model is certainly its very particular design.

As for the ASG Franchi SPAS-12 airsoft replicas, they all work with a spring propulsion mechanism. For each shot fired, 3 balls will be propelled. With a ball of 0.20 g, the range of shooting can reach 25 meters. 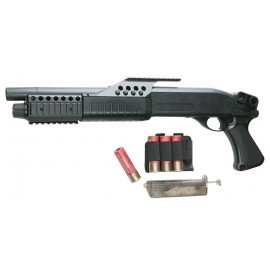