The FN F2000 is a Belgian designed assault rifle manufactured by FN Herstal. It is currently used in the Belgian Army but also in many special forces such as the special forces of Chile, Croatia, India, Pakistan, Peru or Poland (GROM). It is the standard assault rifle of the Slovenian Army.

The FN F2000, introduced in 1996, is an assault rifle chambering the 5.56 × 45 mm NATO ammunition. This rifle is based on the bullpup design but throws the holsters forward rather than to the side. This system is an innovation that allows the rifle to remain ambidextrous without requiring disassembly. There is no literal ejection, the cases are pushed into a tube in the frame above the barrel and fall by gravity just before the muzzle on the right side. Its construction uses low-density polymers and its bullpup architecture ensures very good ergonomics and a compact silhouette ideal for urban combat. Due to the materials used for the magazine, it does not fall out by itself when it is extended, so it must be removed by hand. The FN F2000 is a modular weapon to which accessories (flashlight, scope, laser sight, 40mm grenade launcher) can be fitted via rail.

The airsoft is available in two different colors on our website. 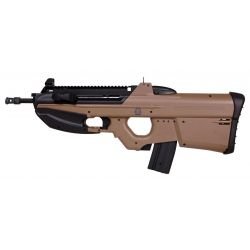 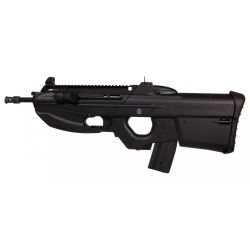