Historical presentation of the M60

The M60 was widely used during the Vietnam War. Compared to an M240 rifle, which is more accurate and has a better rate of fire, the M60 is much lighter (8.5 kg), making it suitable for special operations. The M60 also played a crucial role in the Battle of Mogadishu in Somalia in the mid-1990s. M60s were also used in Kuwait and Iraq as part of Operation Desert Storm. Today, they are also found in some Middle Eastern countries such as Iraq and Afghanistan, although they have been almost completely phased out in favor of the M240.

Specificities of the M60 Airsoft

Your first contact with the M60 airsoft replica will be very good. The build quality is perfect and the details on the gun are what you would expect from a high end airsoft gun. This gun is rock solid and the weight is substantial enough to make you feel like you are carrying a real steel gun.

Going back to the build quality, we appreciate the strength and durability of the materials used, both on the body of the weapon and on the bipod and stabilizer. The rubber handle is soft enough not to tire the hand. We also appreciate the excellent quality of the metal parts such as the barrel release latch, the adjustable rear sight and the carrying strap.

In terms of handling, the trigger is nice and responsive and the safety lock is smooth and robust. The firing mode selector is quite stiff, but that is inherent to airsoft machine guns of this type, as they only offer two firing modes.

What replicas of the M60 are available on Phenix Airsoft?

On Phenix airsoft you will find an airsoft replica of the M60 airsoft. It is the M60 Vietnam from A&K by Jing Gong. It is a 6mm airsoft rifle that is 1100mm long and weighs 8.8kg. It has a fixed breech, but with an adjustable. Its magazine has a capacity of 3500 balls. In terms of performance, this replica is equipped with a short shaft motor with a thread of 14 mm counterclockwise. The weapon can thus develop a power of 1.1 joule.

The M60 airsoft replica that you will find on Phenix airsoft works with an electric mechanism. 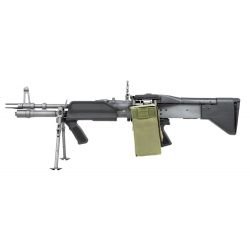